The Emergo Train System Psychosocial support set can be used:

The material consists of survivors of both genders, in various ages, family circumstances and life situations, so as to reflect a normal population of survivors of a major incident. They have been designed to reflect reactions to a potentially traumatic event where the survivor is not physically injured but has been exposed to this. The survivors have different reactions and different coping abilities. This demands individual assessment of the psychological first aid and individual assessment of the follow-up that is needed.

The material can usefully be applied to an exercise that reflects a potentially traumatic event in the form of for example a road accident, bus accident, train accident or house fire. The training set consists of 50 survivors. Each have a conversation card which contains information corresponding to the first conversation the survivor has with a psychosocial support provider. Stickers are included to be used to visualise actions that can be taken during psychological first aid. 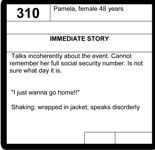